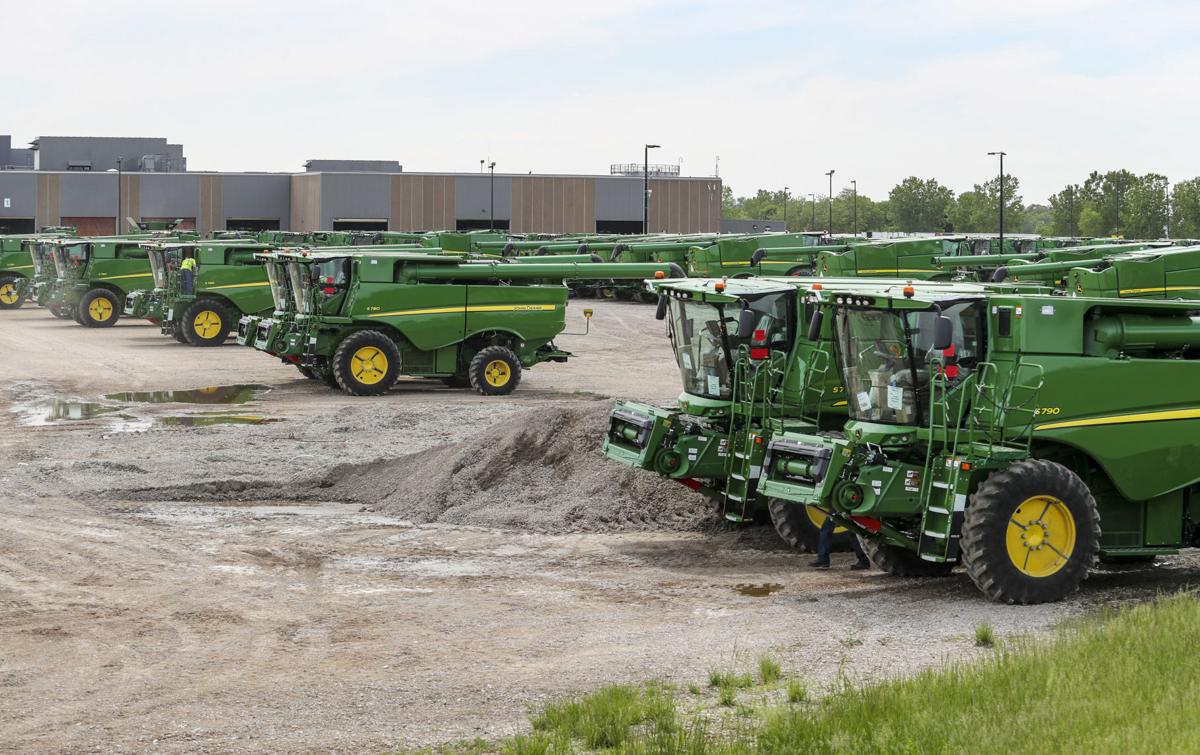 COVID-19 has led Deere & Co. to project $1 billion less in income for its current fiscal year.

After Deere’s first quarter, the Moline-based manufacturer forecast in February it could bring in between $2.7 billion and $3.1 billion in net income for its fiscal year 2020. As COVID-19 sprawled and became a global pandemic in March, Deere pulled back that financial forecast.

It disclosed its second quarter earnings Friday morning, which included a new net income projection of between $1.6 billion and $2 billion.

“We are still operating in a very uncertain environment, given the COVID-19 pandemic,” said Ryan Campbell, Deere’s chief financial officer.

“You look at the second quarter numbers, it’s great. But you have to keep in mind, as of a couple months ago the United States and the world is in a completely different environment,” said Mark Grywacheski, investor adviser with Quad-Cities Investment Group.

“The February unemployment rate, you go from the strongest U.S. labor market in 50 years to a couple months later and it’s a completely different environment. For me, the big number is the almost 40% reduction in their 2020 net income projections.”

The loss of potentially $1 billion in net income, and the reduction in equipment pieces sold, is a microcosm of how the new coronavirus is impacting the U.S. The pandemic has impacted the agriculture supply chain, compounding financial hardships that had been experienced from international trade wars in 2018 and 2019, and the industrial supply chain, or how Deere is able to secure parts to assemble its machines.

Even more than that, Deere’s customers are being affected by the same factors as the company. While the Moline-based manufacturer had projected a 10-15% decrease in construction sales as recent as February 2020, that has been now been doubled.

The largest decline in that survey was the commercial construction sector that went from a 0.6% growth prediction to a loss of 14% between the two surveys.

“Institutional construction spending will also be hard hit, although not quite as seriously as commercial, with losses of 7% now projected, versus 2.9% growth predicted in December,” the AIA wrote.

And while it has been a better spring than a year ago for planting season, farmers are having to grapple with the recent influx of precipitation in the last two weeks. But farmers may continue to make do with their current equipment, which is currently the oldest still in use in years.

Deere is continuing to focus on its precision ag products, or the ability to use technology incorporated in its machines to allow farmers to more precisely maneuver in their fields. Those items can also be added onto older machines for a growing used parts and retrofitting business, something Deere discussed back in January at a consumer trade show.

“In light of the current circumstances, we see it as an obligation to continue investing in precision technologies that support customers and keep them running,” said John May, Deere’s chief executive officer.

“We remain convinced of the value of creating a more agile organization to more nimbly respond to ever-changing market conditions. These organization shifts will ensure our managers are empowered to make decisions and take action as required.”

Even with the coronavirus impact, Deere was able to beat analyst estimates for the second consecutive quarter. Zacks Consensus Estimate for Deere’s earnings per share was $1.99 earlier this week; Deere reported its earnings at $2.11 per share Friday morning.

Shares of Deere briefly jumped Friday morning, but came back down to what was in line with its recent trading price as the long-term forecast was pessimistic.

"They're posting profits, which is good news, but they're also posting profits because of some belt-tightening" measures in 2019 and early 2020, said Dave Swenson, professor and economist at Iowa State University.

"It looks to me like Deere is well managed and is trying very hard to get through this crisis with minimal damage to the company."

And while Deere may ultimately be in a better position now to weather the coronavirus economic impact, with steps it took in job reductions such as a buyout program for salaried workers, it still can’t completely buffer the impact of losing $1 billion in net income. That number ultimately ripples down to Deere employees.

“The economic footprint John Deere has in the Quad-Cities is tremendous. It hires a lot of workers and those workers spend money in the Quad-Cities and the surrounding local communities. So when John Deere realizes it’s going to face some significant challenges in 2020 due to coronavirus, you have to assume that negative impact will be shifted to the Quad-Cities itself,” Grywacheski said.

Deere to pause production in Davenport and Dubuque; more layoffs in Dubuque

Deere & Co. is pausing production at its Davenport and Dubuque facilities May 11, and implementing further layoffs in Dubuque.

Retail and grocery stores will likely restore their supply chains faster than manufacturers. Toilet paper and hand sanitizers, among others, that have seen a surge in demand will likely return to normal inventory levels at some point.

The Scott County Emergency Management Agency did not place any orders this past week to the state of Iowa for personal protection equipment, or PPE, because "we have enough stock on hand to fulfill everything that's been ordered," director Dave Donovan said Friday.

Deere: Waterloo contractor tested positive for COVID-19; hadn't been to work since March 31

WATERLOO — A contractor at John Deere Drivetrain Operations, who has been on self-quarantine since March 31, tested positive for COVID-19 Tuesday.

Deere will make more than 225,000 face shields at its Moline Seeding Group.

Tens of billions of dollars on the line as pro and college sports look to return, with or without fans